This weekend my mission was to boldly go where no men’s banner has gone before. I took part in the Central Canada Comic Con at the Winnipeg Convention Centre, creating another men’s banner on site. Surprisingly this was the best experience I’ve ever had making a banner. I completed one in two days with no negative encounters.  It was awesome and I’m glowing from happiness.
Raven Toys Comics and Games is a store that sells classic toys and collectibles, they organize Comic Con each year in Winnipeg. I approached them about the Men’s Banner Project, they were so enthusiastic and accommodating that I was blown away by their kindness.
I initially thought Comic Con would be a good place to have a banner because it would be bringing the idea of non-violence and respect for women to a specific audience.  Also, not many people know this about me but I’m a really, really big Star Trek fan. I really love it. I grew up watching Star Trek; I loved the stories, the fantasy, the cinematic techniques behind making it and the multiculturalism of the Star Trek universe.  Women are valued in Star Trek; Aboriginal people exist and they fly space ships.  That made a big impact on me as a film maker and activist.
Saturday October 29th, 2011 Day 1 of the Men’s Banner Project at Comic Con
I was super enthusiastic about my project weeks before the convention. I felt completely positive and even a small scooter accident I was in the week before didn’t worry me.  But, when I arrived Saturday morning and began setting up my booth I was overwhelmed by the event. I felt out of place across from comic book artists and a throng of people wandering about in costume. I thought it was a horrible idea to be there and that no one would want to participate.
A red Power Ranger walked by and I called out to him. I explained my project and asked if he would put his hand print on the banner. He said of course and that stopping violence against women was what the power rangers were all about. After that I realized it was going to be a really great day.
Instead of wearing my Aboriginal outfit, myself and Yuri dressed in Star Trek uniforms.
I was so busy creating the banner I didn’t take as many photo’s as I would have liked to. There were so many people dressed up, events, interesting booths and celebrity guests. I met William Shatner, Kevin Sorbo, Jonathan Frakes, Nana Visitor, Ethan Phillips, Chase Masterson and Adrienne Wilkinson, I will be blogging about each encounter separately.
Throughout the day when men walked by I called out “I’m looking for a hero!”  Below is some of the men who responded to my call. 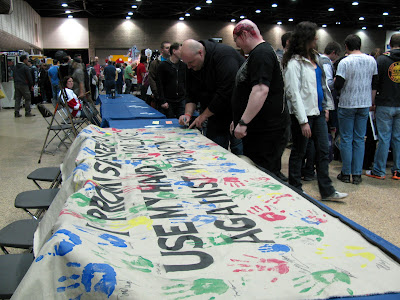 This is how Artis likes to take in historical site

They were a little worried about being in separate

Me and my study buddies! #twins #firstdayofschool

Yuri gave me this beautiful ribbon skirt for our a

Oberon and Leo at the meet and greet for their cla

Behind the signs at the art show. #allmyrelationsa

At the art show. #allmyrelationsartshow #artshow #

Yuri and his drawing. #allmyrelationsartshow #out

Signs of Change display. #allmyrelationsartshow #a

Yuri and his painting. #allmyrelationsartshow #out

My Every Child Matters Labyrinth and a Men’s Ban